Jesse’s Café Américain: US to Backstop the Anglo-American Derivatives Exchanges with Fed Dollars – ‘Too Big To Fail’

The derivative monster, AKA Quadzilla, is on the move. You didn’t think he was really gone or vanquished did you? Instead of a death ray from his mouth, he lays waste with a blast of hyperinflation. When Quadzilla approaches Wall St, the Bernank’s printing press fires up in a big

“He who makes a beast of himself gets rid of the pain of being a man.” Samuel Johnson

It sounds like the principle of keeping AIG whole on its obligations so that it can pay off to the banks at 100 cents on the dollar. This should make Jamie feel a little better about his bad derivatives trades.

And Blythe should rest easy knowing that Benny has her back on those massive metals shorts.

Sounds like they even plan to have the Fed backstop the derivatives trade in London.

Heads the banks win, tails those holding US dollars lose.

How will they support the next bailout? Austerity!

Wall Street Journal
A Mess the 45th President Will Inherit
Thursday, May 24, 2012

…Little noticed is that on Tuesday Team Obama took its first formal steps toward putting taxpayers behind Wall Street derivatives trading — not behind banks that might make mistakes in derivatives markets, but behind the trading itself. Yes, the same crew that rails against the dangers of derivatives is quietly positioning these financial instruments directly above the taxpayer safety net. 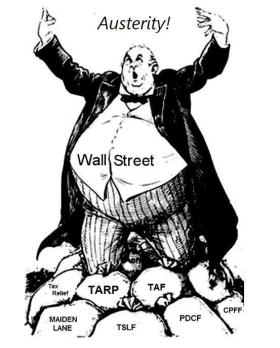 As we noted in May 2010, the authority for this regulatory achievement was inserted into Congress’s pending financial reform bill by then-Senator Chris Dodd. Two months later, the legislation was re-named Dodd-Frank and signed into law by Mr. Obama. One part of the law forces much of the derivatives market into clearinghouses that stand behind every trade. Mr. Dodd’s pet provision creates a mechanism for bailing out these clearinghouses when they run into trouble.

Specifically, the law authorizes the Federal Reserve to provide “discount and borrowing privileges” to clearinghouses in emergencies. Traditionally the ability to borrow from the Fed’s discount window was reserved for banks, but the new law made clear that a clearinghouse receiving assistance was not required to “be or become a bank or bank holding company.” To get help, they only needed to be deemed “systemically important” by the new Financial Stability Oversight Council chaired by the Treasury Secretary.

Last year regulators finalized rules for how they would use this new power. On Tuesday, they began using it. The Financial Stability Oversight Council secretly voted to proceed toward inducting several derivatives clearinghouses into the too-big-to-fail club. After further review, regulators will make final designations, probably later this year, and will announce publicly the names of institutions deemed systemically important.

We’re told that the clearinghouses of Chicago’s CME Group and Atlanta-based Intercontinental Exchange were voted systemic this week, and rumor has it that the council may even designate London-based LCH.Clearnet as critical to the U.S. financial system.

U.S. taxpayers thinking that they couldn’t possibly be forced to stand behind overseas derivatives trading will not be comforted by remarks from Commodity Futures Trading Commission Chairman Gary Gensler. On Monday he emphasized his determination to extend Dodd-Frank derivatives regulation to overseas markets when subsidiaries of U.S. firms are involved…

This entry was posted in Uncategorized. Bookmark the permalink.