Dan Norcini: Live or Die by the QE Sword

Live or Die by the QE Sword

Today’s rally in gold (and in silver for that matter) was completely based on expectations for additional liquidity measures forthcoming from the Central Banks of the world. First there was chatter than China would be easing. Then came expectations of a rate cut from the ECB. If that were not enough, talk surfaced that the Bank of England would be restarting its bond purchasing program (England’s QE) and of course, the non-stop, near religious belief that the Federal Reserve is going to start round 3 of QE “anyday now”.

I do not know about you readers but I am more and more disgusted with what is happening to the trading/investing community in this modern financial system. They seem to have lost their collective minds and their ability to reason.

In a most perverse manner, (perverse is about the only word that I can find to express the sickness that pervades the financial system), the worse the economic data has become, the better the stock markets of the world seem to do. Rotten economic data out of China – why let’s just buy copper and increase the price $0.25/pound in less than two weeks. After all, China is sure to lower interest rates and that will certainly ramp up demand once again.

When even Goldman Sachs’ reasonable call for a lower stock market based on its solid analysis of the economic condition gets blown out of the water, you know that the financial world now calls light, darkness; bitter, sweet; and down, up. It really does seem as if we are living in a parallel universe where the “normal” rules are inverted.

The short of all this is simple – for whatever reason, traders have now been properly conditioned by the authorities to buy more and more equities, the worse the economic news becomes. Since traders have been led to expect that Central Bank activity will generate inflation, they bid up the price of the so-called “risk assets”, which includes both stocks and commodities.

My own personal belief is that the additional QE will do absolutely NOTHING to impact the LONG TERM PROBLEMS that beset the current global economy. The problem is not that money is not cheap enough – the problem is that there simply too much debt. That however will not stop these Central Banks from pushing the accelerator on the liquidity car nor will it stop these SHORT TERM inflationary outbursts that result as this liquidity finds its way into both equities and commodities. At some point the debt has to clear. What we get however is short term bursts where the VELOCITY OF MONEY increases only to then drop off a cliff as the impact of the QE subsides. In a very real sense, the entire global financial system has now evolved to the point where it truly does either live or die by the QE sword.

A quick look at the gold chart shows the market has found strong buying support down near the bottom of a range near $1550 and strong selling near the top of this range between $1620 – $1630. The latter has been a tough nut for the bulls to crack.

Should the gold bulls be able to muster sufficient strength to beat back the bullion bank selling originating up there, it has a real shot at tagging $1650. Getting through there would be the first legitimate shot gold has at getting to $1680, a level it has not seen since April. 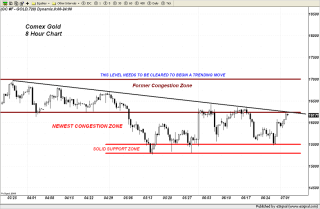 One last thing, I had mentioned a while back in another post that I was of the opinion that the Fed did not want to let the QE cat out of the bag too prematurely as they are acutely aware of the ramifications of rampaging hedge funds particularly in the energy sector of the commodity complex. My suspicions were that these monetary gods would try to wait until the price of unleaded gasoline dropped closer to $2.50 or so before their mouths started yapping about bringing on another round. Lo and behold – look at the unleaded gasoline chart.

Now isn’t that sweet! We finally start seeing a wee bit of relief at the gasoline pump and what do our barons do to us – they make certain that we will not be spared from our former pain for long. Gasoline has increased $0.25/gallon in two weeks time based on nothing but hype about QE. Imagine what will happen to this chart if they do indeed give the word. Sad thing is even if they don’t, Iran is making noises again and that in itself has the energy markets a bit nervous. 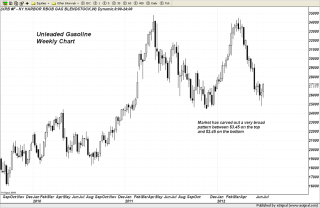 Ben Bernanke has a problem however. If he pulls the trigger on the QE gun to prop up the equity markets for his boss Obama in time for the election, he will NOT BE ABLE TO AVOID surging gasoline prices, which are one helluva negative factor for any sitting incumbent to overcome. Nothing has as much IMMEDIATE impact on the consumer and average citizen as soaring gasoline prices at the pump – NOTHING.

This entry was posted in Uncategorized. Bookmark the permalink.